Winter arrived at 775 N Ashtree Way with the first snowfall. Even on brisk days, His Highness Satch takes a daily stroll through his territories cloaked in a heavy fur coat and wearing an electric collar.

We live in fox and coyote country. One hiker found a fox den with 17 cat collars inside about two blocks from Ashtree Way. While Satch finds the electrical collar demeaning, the collar also represents freedom to be outside without becoming fox bait. The household compromise for traipsing in the backyard is His Highness’s acceptance of security measures. When Satch first got the collar, he ran at the electric fence like a bull until he hit the current. He suddenly pulled up on his haunches, started pawing the air and fell over backwards in the grass (very undignified for a king). A quick study, he now recognizes the controlled boundaries but always pushes the limits. One day when the battery went down, he was over the fence into the open fields behind Ashtree Way in a blink of an eye. Fortunately, his mistress watched this maneuver from the window and thwarted the planned escape by running in hot pursuit. Even though Satch spends hours contemplating freedom, the cold air means that he becomes more demanding and less tolerant, when said mistress doesn’t answer his yowls to come in promptly.

The entire Brigade adapts to the cold by spending more hours indoors, even Private Shani who has hair enough for the entire Brigade. The Brigade spends a lot of down time in sunny spots scattered throughout the house and basking by the fire. But the Brigade is an energetic group and too much down times leads to trouble. Several raids have occurred on unmanned trash baskets filled only with Kleenex—tearable, shredable, tasty what could be more inviting on a cold day.
The Brigade has begun engaging in more indoor horse (dog) play. Sergeant Violet, fighting as a lightweight, routinely bests Private Shani, the welterweight at their daily chase and neck biting battles.

These contests begin in the kitchen, rapidly move through the great room, into the front hall and finish in the kitchen with a quick gulp from the water bowls. The cats watch these antics from afar.

This fight just got more interesting 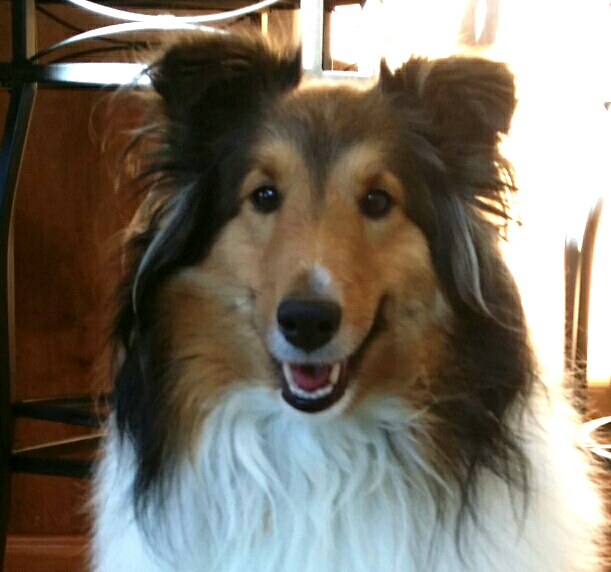 Not to be bested, Sergeant Angel has been known to pounce on the unsuspecting Highness. This is always a mistake. His Highness swats and bats Angel’s meager efforts at supremacy back with a couple of quick moves. He finishes each skirmish with a growl and flicks his tail as he walks away to claim his throne.

Back at the castle the king rests