Idaho greeted 2016 by dropping a potato on Steroids in front of the Statehouse.

Yes, it’s true, Idaho has a potato fixation. Thirty percent of all potatoes grown in the United States come from Idaho. The potato is Idaho’s leading agricultural crop. We even host a national bowl game, called the Famous Idaho Potato Bowl (suggesting that in some other unworthy location is another football game named for a tuber). 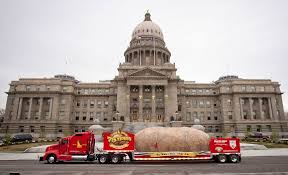 The six ton spud spent 2015 traveling to 29 cities covering over 22,000 miles.  For folks into trivia, the giant potato is comparable to 32,346 medium potatoes, weighs 1,102 times more than the largest potato ever grown (11 pounds) and could be made into 1.5 million French Fries (pass the ketchup!) The national advertising for the commission features an Idaho farmer, who has lost the truck, asking people who see the giant roaming tater to send it home. According to the President of the Idaho Potato Commission, wherever the truck goes people shout, “Go Home!” (see clip below)

Given that Idaho is known for potatoes, I was not surprised when Astronaut Mark Watney (Matt Damon) in the movie, The Martian (2015) survived on Mars by growing spuds. The movie is based on  Andy Weir’s novel (2011) of the same name. In interviews, Weir has said he tried to make the novel as accurate as possible.   The movie begins with the crew of Ares 3 collecting Mars samples  outside the spaceship. A huge sand storm forces a hasty exit. Watney, who is struck by an antenna as the crew flees to the ship, is left behind for dead. Watney miraculously survives his injuries and has  to figure out how to live on Mars,  contact NASA and contrive a way home.  A botanist, Watney knows that the potatoes available in the space station have the potential to grow.  His job is to “science the hell out of this!” until somehow help can arrive.  The main theme of the movie just like the Idaho Potato Commission advertisement for the Great Big Idaho Potato Truck is “Bring Him Home!” 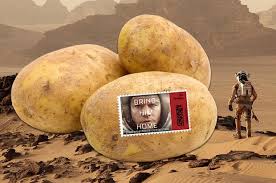 The Martian is thrilling, funny, and age appropriate for a wide range of ages. I took my two children, a college senior and tenth grader on Christmas day and  both enjoyed it.  The movie is on the Oscar short list for Best Picture, Best Director (Ridley Scott) and Best Actor (Matt Damon).  If your family includes children ten or over and you need a family night together, watch The Martian.  You’ll have fun cheering Astronaut Watney on, you’ll learn something about solving one problem at a time instead of becoming paralyzed by doubt, and you’ll end up having more respect for the lowly potato.