We travelled to Alaska in June, 2014 on a family vacation. While many of our friends have seen Alaska on cruise ships, we chose to fly into Anchorage, rent a car and see the country side up close and personal. I had seen a driving trip outlined in Sunset Magazine that we used as our guide. The Sunset Magazine described a 10 day Grand Tour.  Since we only had 7 days, we opted for our own self-guided “Taste of Alaska” tour. I booked everything in advance. During the tourist season spontaneity in terms of lodging is not a good idea. We flew into and spent our first night in Anchorage.  You know you are in Alaska when there are signs on the walls going into the motel, “Watch out for Moose!”  This was at a Clarion Inn in the center of Anchorage. 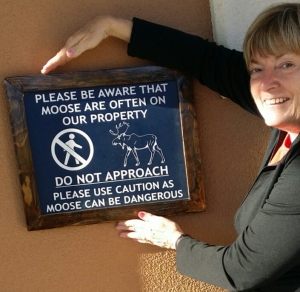 Over our seven day adventure, we drove from Anchorage (one night ) to Denali (3 nights), Denali to  Talkeetna (1 night),  on to Seward (2 nights) and back to Anchorage (1 night ) out early the next morning on Alaskan Airlines.  We did not want to spend our entire trip in the car so we cut Fairbanks out of the itinerary.  Anchorage to Fairbanks is a full day’s drive as is Denali to Seward.  From Anchorage to Denali is a 5 hour trip.  Time estimates are based on regular driving.  Since we had gone to see Alaska, our travel times took much longer as we stopped regularly to take in majestic views, watch animals, or visit Alaskan communities.

We saw many gorgeous sites and dined on delicious food. After all, who couldn’t like fresh salmon every night unless you are a vegetarian? While I may choose to share with you other parts of our fabulous trip in future blogs, this blog is focused on the fickleness of the Alaskan electorate. It seemed appropriate given that the presidential primaries are in full swing.

While traveling Alaska, we learned why Sarah Palin was such a popular Governor of Alaska. One small community in Alaska has elected a cat their Mayor for the past 19 years running.  Given Alaskans elect house cats at the local level, not surprising they would elect a mountain lioness like Sarah-Governor.  Claiming to be able to  “See Russia from your porch” is formable campaign rhetoric, especially to a population that thrives in vast expanses of unfenced territory where there are more wild animals than people.

Talkeetna (population 876) is a historic village at the base of Mount McKinnely.  The community serves as  the take off point for climbers who plan to scale the mountain.

The town is presided over by Mayor Stubbs, a cat.  Stubbs is 19 years old and has been honorary Mayor since he was kitten.  Town lore is that Stubbs was elected Mayor by write-in vote when the citizens of Talkeetna did not like the human candidates.  Those of us watching the Republican Presidential Primary season can certainly understand the populist rebellion against all the candidates. Stubbs long retention in office is  attributed to his appeal to tourists (30  to 40 people visit him every day).

When we went in Nagley’s General Store where Stubbs resides, we were told we could take pictures but couldn’t bother him because he gets tired of all the attention.  Stubbs has been featured in the Wall Street Journal, New York Daily News, and CNN.  The media’s obsession with Stubbs, demonstrates  the media will do anything to generate political stories.

Stubbs got his name because he does not have a tail (though he certainly has many tales). Like many politicians, Stubbs has had his share of burdens from constituents.  He’s barely survived an attack by a canine, placing him in the animal hospital for 9 days and resulting in donations from all the world to pay for his care.  He has also been shot at by BB gun-wielding teenagers.  Taking the ole’ saying out of the pan into the fire literally, he has fallen in deep fryer (which thankfully was turned off at the time).

If you are experiencing political discontent over the current presidential primary cycle, think about writing in your favorite cat when you vote. After all, the domestic cat has shown throughout its long history that it is able to learn, problem solve, adapt to their environment, acquire new behaviors based on new situations and communicate effectively.  These characteristics sound like excellent skills for any politician.

Your other alternative is to act like a cat, ignore primary season and plan an early spring trip to Alaska. If you go, you will find yourself creating wonderful memories of glaciers, mountains, wildlife and unique Native cultures.

Your stay wouldn’t be complete without breakfast at the Road House, known for it’s bigger than life pancakes for almost a 100 years.